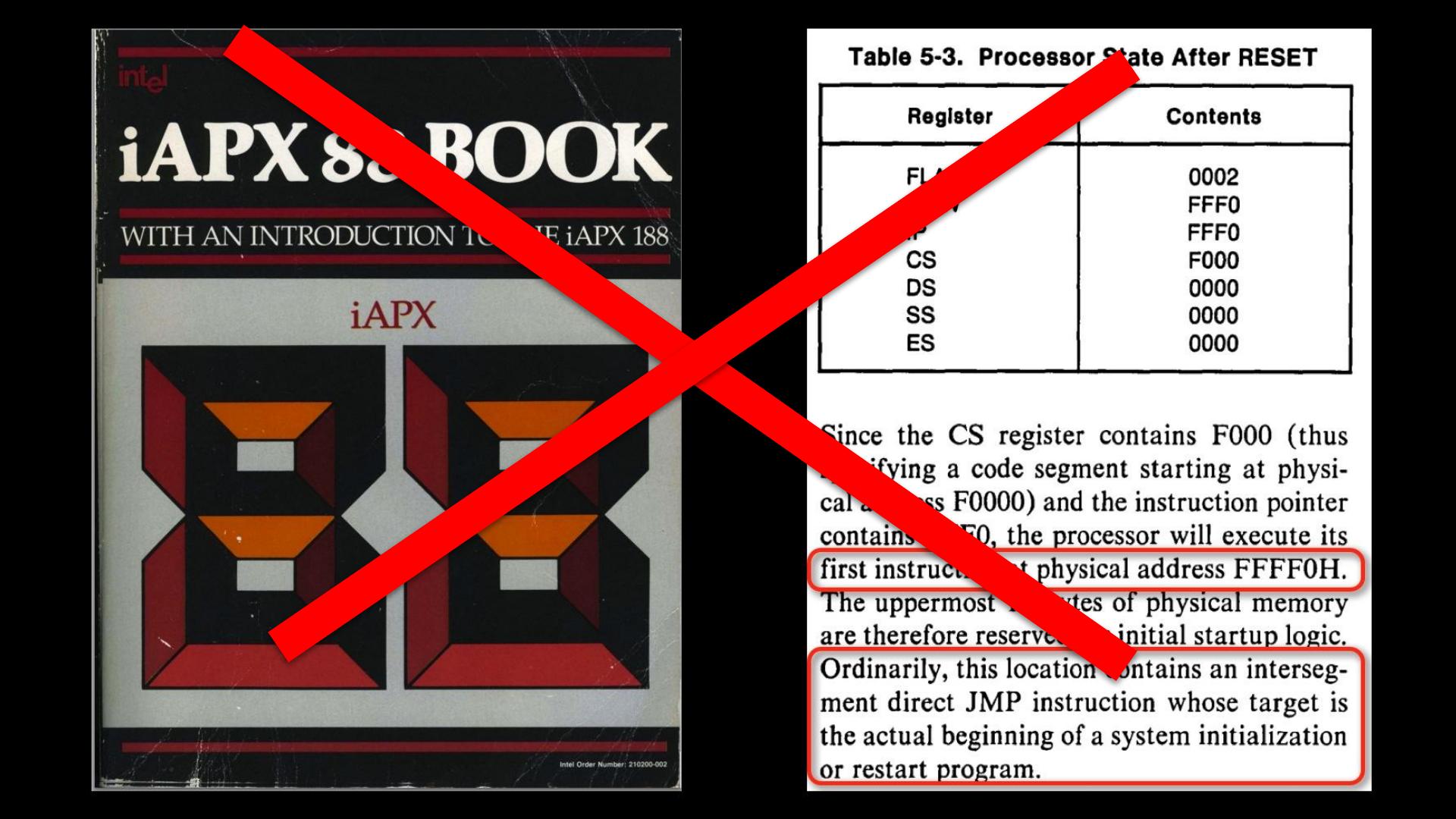 Booting a modern x86 CPU is no longer as simple as it used to be. This page attempts to document the entire chain of trust and keys involved in securing the boot process. It is based on reverse engineered and observed behaviour, so it may not be entirely accurate. Hopefully it is still helpful. 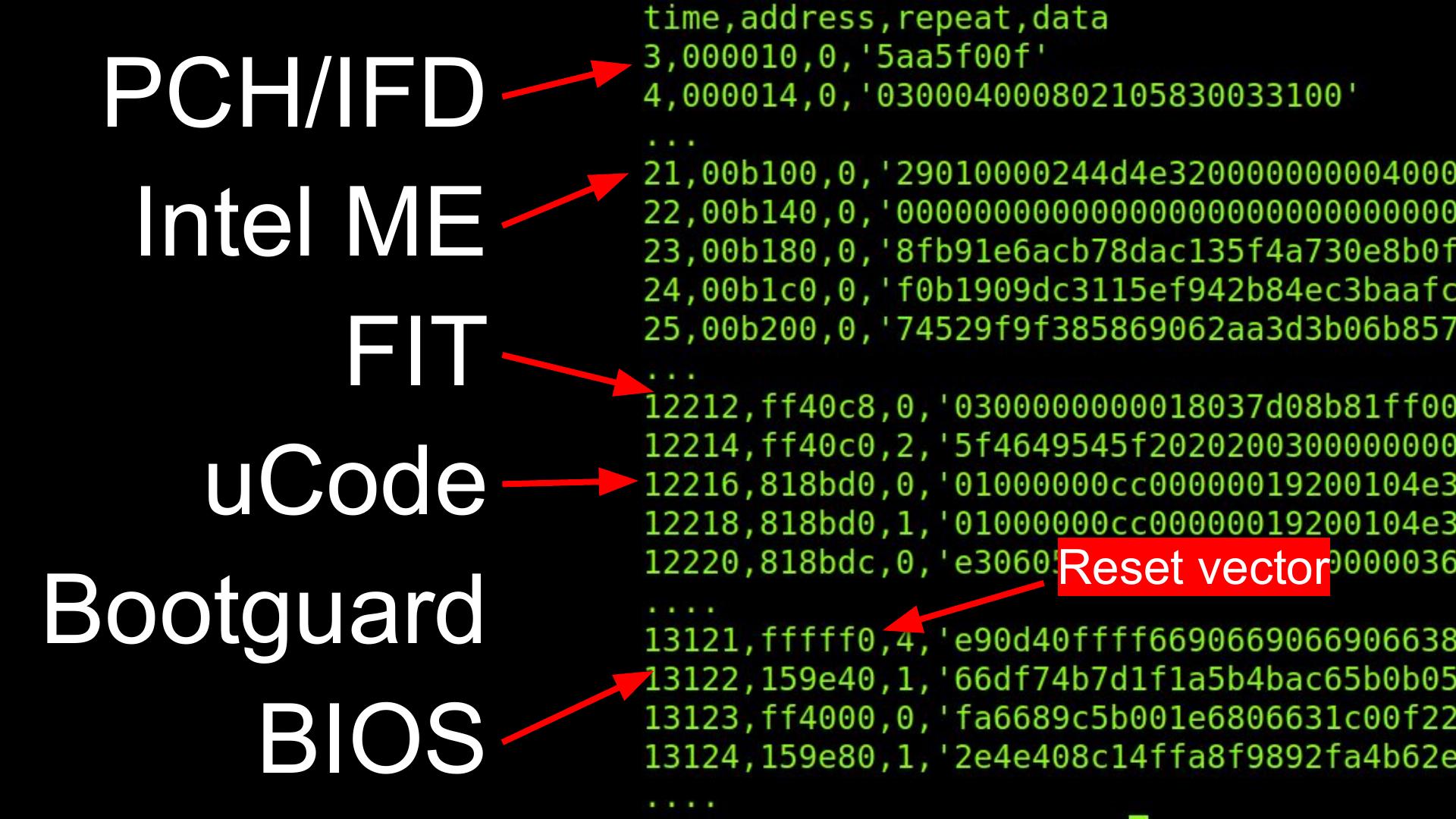 As soon as power is available, the ME boots up from its on-die boot ROM, checks some straps and fuses to determine its configuration, and typically then copies the flash partition table from the ME region of the flash to its on-die SRAM (although ROMB fused chips have limited security). The boot ROM locates the FTPR partition and copies it from the SPI flash into the on-die SRAM. It then checks that the SHA-1 hash of the key stored in the parition manifest matches the one in its on-die ROM and validates the RSA signature on the rest of the partition manifest. The partition table contains hashes of each of the modules in the partition, allowing the modules to be validated after they are copied into the on-die SRAM for execution (Intel ME Flash File System Explained - Sklyarov et al, BH-EU 2017).

When the ME starts the clocks for the x86 CPU, the on-die microcode fetches the Firmware Interface Table (FIT) pointer at 0xFFFFFFC0 which points to the FIT table somewhere in the SPI flash image. This table is then searched for microcode updates that match the CPU ID. The current microcode copies them from flash in a linear fashion (into L3 cache?) and decrypts with an on-die symmetric AES key (Chen & Ahn 2014), then validates with (on-die?) RSA key. It's likely that these ucode updates also contain the key hashes for the ACM.

Next the x86 ucode goes back to the FIT to find the Startup ACM and does an odd copy of it into L3 (looks like multiple hyperthreads are copying 4KB chunks?). The ACM contains an RSA public key; the ucode compares it against either an on-die key (hash?) or one stored in the ucode update and halts the CPU if it does not match. The ucode then checks the signature on the ACM and again halts if it does not match. 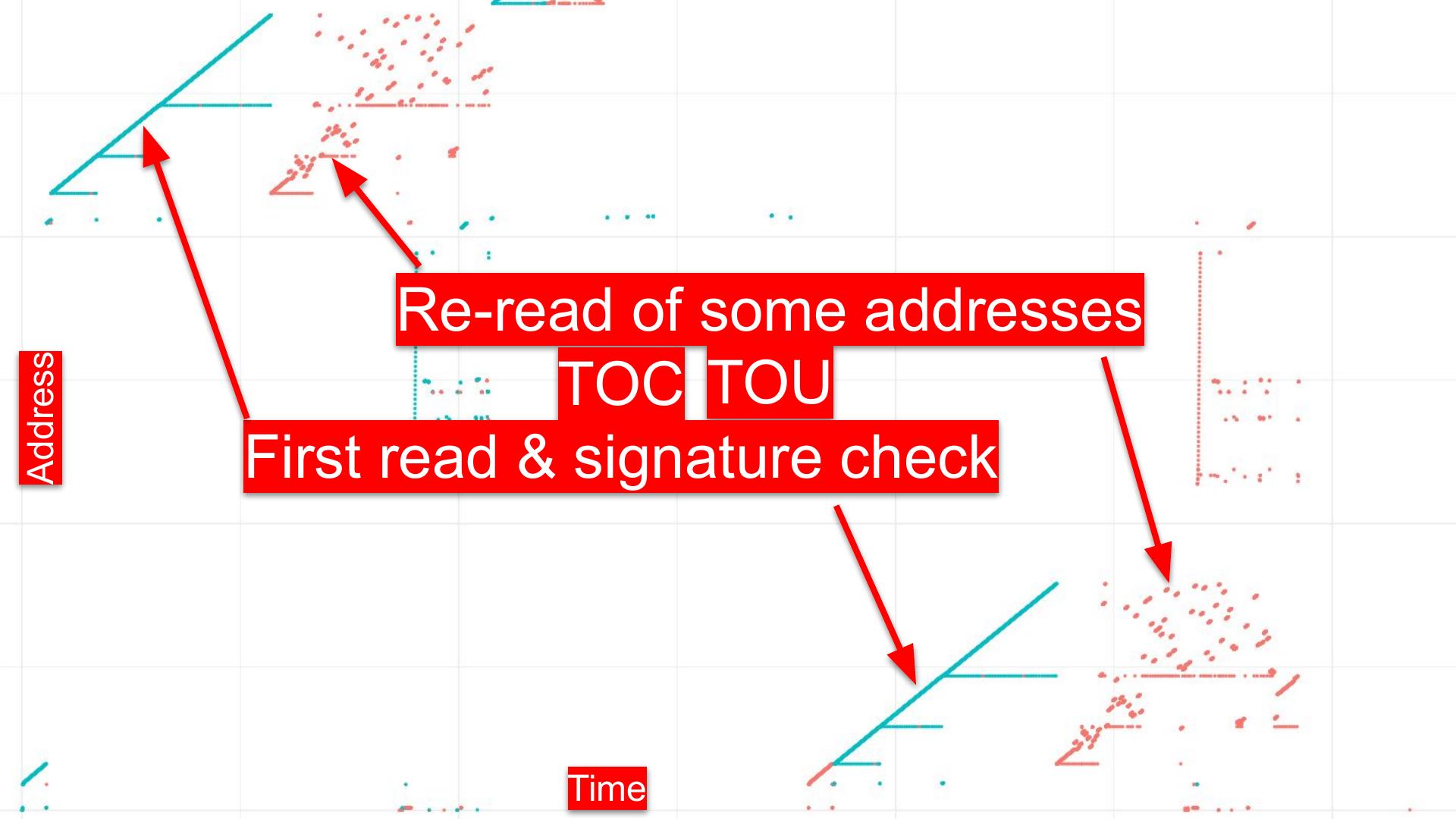 The Startup ACM is supposed to run entirely out of L3, although there have been bugs (Bosch & Hudson, 2019) that allowed a proximate attacker to use devices like the Spispy to detect accidental cache misses and TOCTOU the firmware. The ACM receives the OEM public key hash and Bootguard Profile from the ME via MSR. (Not certain of the order of operations here).

The ACM reads the BootGuard Key Manifest from the SPI flash (pointed to by the FIT and identified by __KEYM__) into L3 and hashes the RSA public key stored in it. If it doesn't match the OEM public key hash or if the OEM public key signature on the Key Manifest or if the stored KmSvn isn't right, the ACM takes action based on the Bootguard Profile bits. If it does match, it locates the Bootguard Policy in the FIT (and identified by __ACBP__) and copies it into L3. The ACM then computes the hash of the RSA public key in the Policy and compares it to the SHA256 hash stored in the Key Manifest. If that fails to match, or if the RSA signature on the Policy doesn't match, then the ACM again takes action based on the Profile settings.

The ACM uses the now validated Bootguard Policy structure to read the Initial Boot Block (IBB) segments into L3, hashing them as they are copied (and hopefully not causing any cache misses). If this computed hash doesn't match the "IBB Digest" in the Policy, the ACM takes action based on the Profile settings. 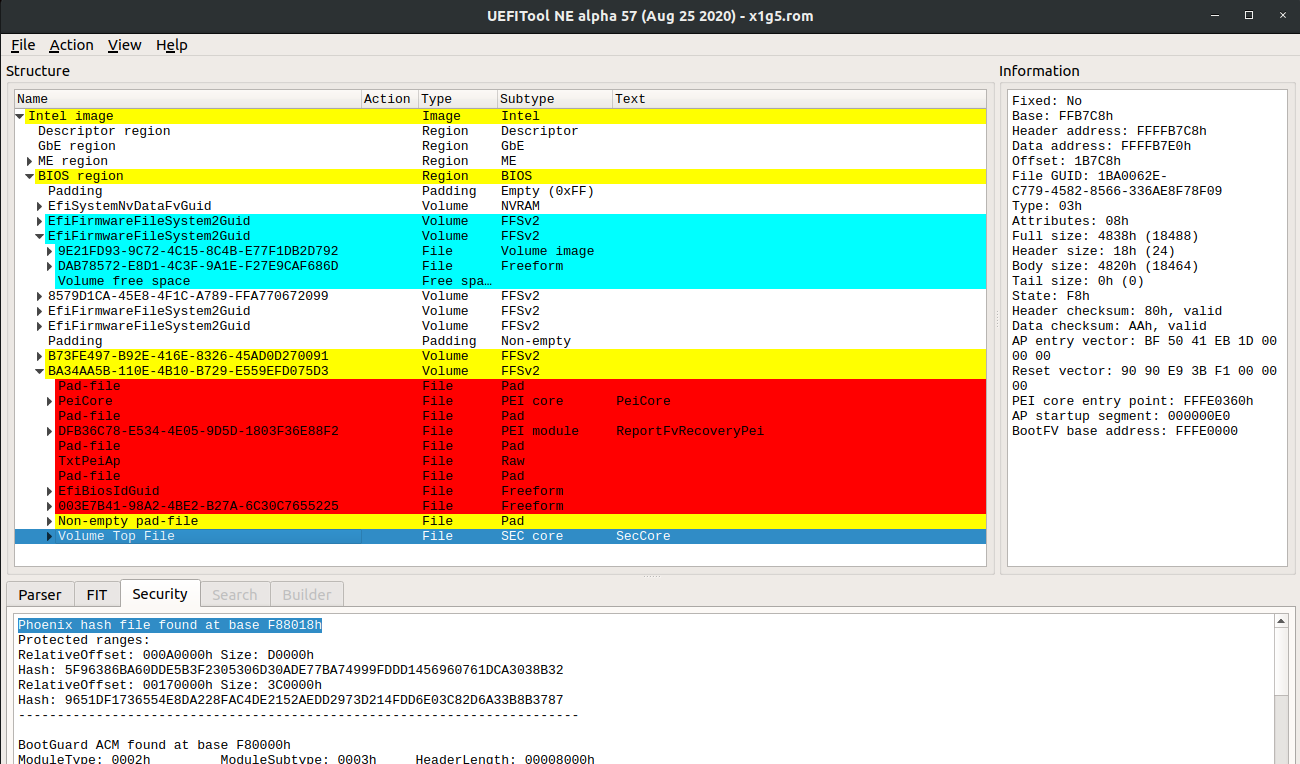 After some parts of the UEFI firmware are hashed and validated by BootGuard, the ACM executes a GETSEC instruction to jump to either the legacy reset vector at 0xFFFFFFF0 or the address in the BootGuard manifest. This is typically in the PEI firmware volume and in the SecCore.efi executable with the VolumeTopFile GUID.

At this point the chain of trust is now controlled by the OEM and they are responsible for validating the rest of the firmware. Usually they will jump into the Intel FSP to initialze DRAM (on AMD the PSP has initialized DRAM prior to starting the BIOS, although they have a separate chain of trust entirely).

Once DRAM is initialized, the SecCore copies the DXE firmware volumes from flash into RAM and computes their hashes. The major BIOS vendors (IBV) have their own data structures, such as the AMIHash or PhoenixHash, that are used to enumerate the regions to be hashed. This is another common area of TOCTOU attacks against the boot process.

The UEFI firmware stores non-volatile configuration data in the flash as well. These "nvram variables" are controlled by the computer owner and begin the chain of trust transition from the OEM to the owner. The SecureBoot variable tells the firmware if it should enable UEFI Secure Boot. If it is set, then the firmware will attempt to enforce the secure boot policy.

To do this it has a Platform Key (PK), which signs the Key-Exchange-Key (KEK), which signs entries in the key database (db) as well as key revocation entries (dbx). Typically the PK and KEK are OEM keys (I think) and the db is preloaded with Microsoft's key. Linux distributions and tools like grub have paid Microsoft to sign their bootloaders, which allow them to boot on commodity systems with UEFI Secure Boot enabled. It is also possible to replace these keys, and the safeboot project loads an owner controlled key into the PK to ensure that only owner signed code will be booted.

However, before the firmware can locate the boot disk, which might be SATA, NVME, USB, or network, it needs to initialize the hardware and possibly load Option ROMs from devices to configure them. These Options ROMs are literally x86 code that is run in ring 0 while the system is still in a very vulnerable state, so it is important that they be signed. Option ROMs have been an easy vulnerability for local attackers for many years (Heasman BH'07, snare BH'12, Hudson 31C3/BH'15).

Once the devices have been initialized, UEFI transitions to the Boot Device Selector phase (BDS), which uses the nvram variables BootNext, Boot0000, Boot0001, etc to determine which boot loader to use. The BDS also calls bs->ExitBootServices() to tell the firmware that the OS is about to start, which locks some of the firmware variables from further updates.

(To be added: shim protocol?)

Linux has a kernel key ring that is loaded at boot time with the UEFI keys as well as a compile-time key. It validates kernel modules with this key. (To be written)