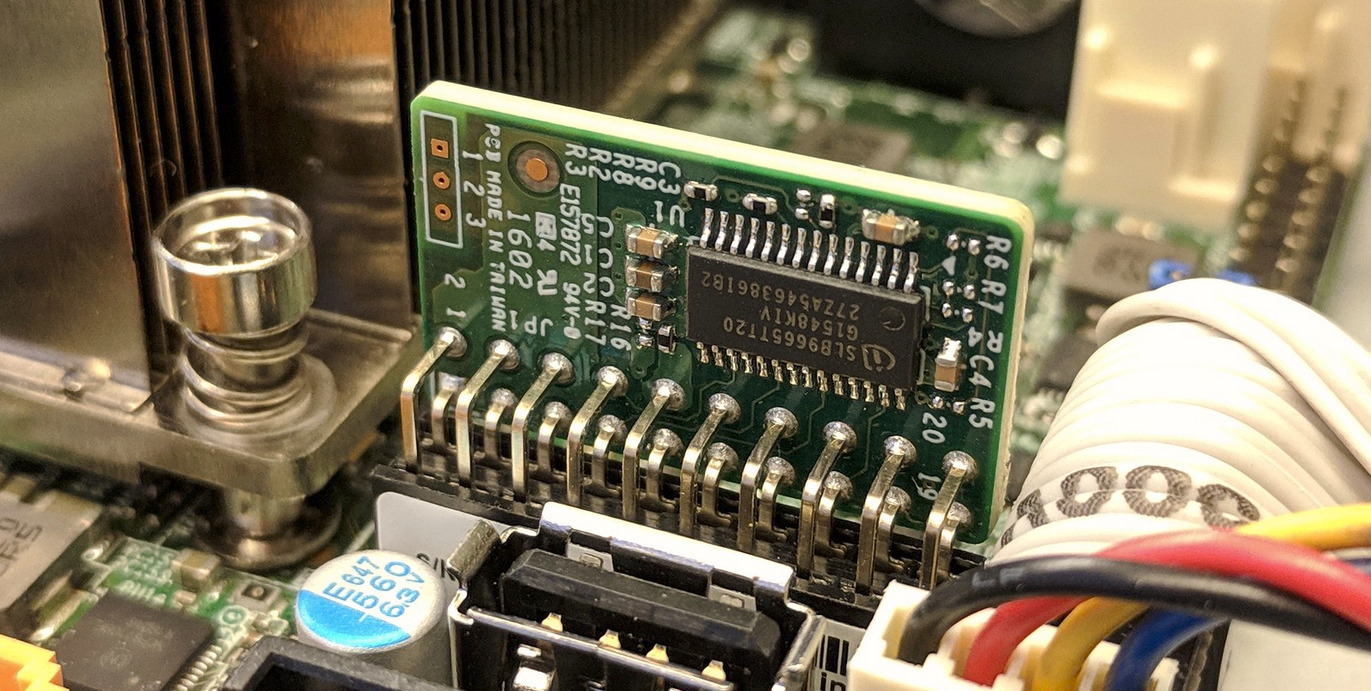 When the user wants to connect to another computer over the network, they typicaly authenticate with a password and some sort of two factor token to prove to the remote system that they are authorized to make the connection. In high assurance applications, however, it is also important that the local computer be able to attest to the remote server that the local computer itself is both authorized and is also in a known configuration.

The TPM provides a mechanism to do this sort of remote attestation, similar to the way that the disk encryption keys are "sealed" based on the PCRs and only decrypted if the platform configuration matches the sealed values. The tpm2-tools package has many of the pieces, but it is at too low a level for humans to use. Other parts of the validation exist in the openssl package, but again are not easily used and require format conversions from the TPM formats.

tpm2-attest attempts to wrap all of the various parts of those two packages into a simple script that provides the four main attestation functions: sign a quote, validate a signed quote, seal a secret for a specific TPM, and unseal it with that TPM.

Related to this is attest-enroll, a script that enrolls a device (e.g., a laptop, a server, etc.) given just its TPM's endorsement key's public key (EKpub) and a name. Enrollment can produce and encrypt to that EKpub any number of long-term secrets that are later sent to that device during successful attestation.

The protocol requires a one round-trip between the local machine (the client) and the remote attestation server), and all comunication between the Client and the Server can be in the clear. There is no sensitive data exchanged -- the quote.tar file contains only public keys and PCR values that are essentially public, and the cipher.bin reply is encrypted with the TPM's Endorsement Key, so it should only be unsealable by that specific TPM.

A MITM could substitute a different EK/AK pair, although this does not allow them to masquarade as the TPM of the attesting machine since they do not have the EK for that TPM, and the real TPM won't be able to decrypt the response from the attestation server since it would be encrypted with the wrong EK.

The keys involved are:

There are two protocols: enrollment, and attestation. Each protocol is one round trip.

The enrolled state consists of secrets encrypted to the client's EKpub and cleartext metadata.

The client recovers the AES-256 session key using TPM2_ActivateCredential() and then decrypts the secrets in its enrolled state. This is done with:

An optional second round-trip allows the client to prove possession of the EK and AK, and this can be used for logging the client's attestation status.

When the Server receives the quote file from the client, it runs:

With this command the server will:

If the command fails, then something is likely wrong on the Client side and requires remediation. The Server should not proceed to sealing a secret for the Client.

Suprisingly, the Attestation Key is not signed by the Endorsement Key, so the Server has to check the EK certificate to ensure that it came from a real TPM. Additional, the Server must check the AK attributes to ensure that it has fixedtpm and sensitivedataorigin set, which indicates that the AK was generated inside the TPM. Even with these checks, the Server is still trusting that the TPM hardware implements tpm2_activatecredential with all of these checks correctly done, since the sealed data is encrypted with the EK, not the AK. (Like many things with the TPM2, this is a really baroque way to organize the keys).

Assuming the validation passed, the server can seal secret data such that only the TPM that produced the signed attestation will be able to unseal it, and has faith that the TPM will not unseal it if it has been reset (to prevent attacks that reboot into untrusted firmware):

With this command the Server will:

The Server then sends this encrypted blob to the Client.

Note that there is a verify-and-seal that combines both the quote validation and the sealing of the data to the attestation key in one step:

Once the Client receives the sealed blob from the Server, it attempts to unseal it with the Attestation Key context that is left over from the initial quote signing:

With this command, the Client and TPM will:

At this point the Client can use the shared secret to authenticate to the Server, a network, or decrypt it's disk, or whatever. The TPM is no longer involved.

A key part of the remote attestion is being able to trust that the TPM hardware is produced by a TPM manufacturer. Much like SSL Certs for websites, the TPM's Endorsement Key is signed by the OEM with their Intermediate CA, which is signed by a Root CA. Unlike SSL, the Root CAs are often not in the system's /etc/ssl/certs/ directory, and not easily accessible online. Some OEMs publish them in datasheets (ST TPM EK certificates), some have online portals to select per-device intermediate certs (Infineon Optiga certificates), and some just say "Contact manufacturer for more details" (Atmel/Microchip EK Configuration).

Luckily Microsoft has a CAB file with all of their approved TPM OEMs in their guide to setting up shielded VMs. These x509 certs are in DER format (and have a few odd ones), so they have been converted to PEM and bundled into /etc/safeboot/certs/ for validating the TPM attestations.

If you add your own TPM keys to the directory, you will need to re-build the symlinks that OpenSSL uses for the -CApath:

Unfortunately not all TPMs store their EK certs in the NVRAM; some of them require an online query to the OEM to generate the certificate. There is the tpm2_getmanufec program that is supposed to help with this process, although it hasn't been integrated into this tool yet. An alternative is to sign the EK with a key under your own control with tpm2-attest ek-sign. This will produce ek.crt, signed with the safeboot key. The signing operation can be done out-of-band on a different machine.

Usually the EK public components can be extracted from the TPM, signed, and the resulting signed ek.crt can be stored back into the TPM nvram. Note that this will erase an existing OEM cert if you have one!

Google Cloud's ShieldedVM service enables vTPM for the guests, although it does not provide an EK in the NVRAM either. The key can be retrieved out of band with these instructions, or the public component can be read from the tpm2 createek command described above. Using the Google Cloud ShieldedVM lookup service can function as an EKcert as far as establishing trust in an instance's vTPM.

Since the quote does not contain any clear text information and the response is sealed specifically for the TPM that generated the quote, a simple http server can be used to perform the attestion verification. A demo in sbin/attest-server performs this, using a fixed set of PCRs and a table of public key to secret mappings for the listed endorsement keys.

On the server run:

And on the client:

Why is this a shell script?

It is often desirable to perform a remote attestion inside of an initrd, where there aren't fancy runtimes for Python or more advanced languages. So the quote generation needs to be written assuming very limited resources, as does the response unsealing.

The remote attestation server side could be implemented entirely in a more civilized language, especially since the Server does not require any TPM interaction at all -- all of its work is done in software and can be run as an ordinary user.

As an example of moving some functionality into better languages, the tpm2-eventlog-validate tool that parses the TPM2 event log and generates expected PCR values is written in Python.

I thought remote attestation and TPMs were only for DRM?

One of the big fears in the free software community was that TPM's would be used to lockdown the devices and implement DRM. That hasn't developed in general purpose computers and mjg59's TPM guide concludes with "the current state of technology doesn't make them useful for practical limitations of end-user freedom". There's a far bigger threat to user freedom in the locked-down world of mobile devices; currently most x86 machines allow rekeying with user keys, so the software (but not the firmware) is still under owner control.

Remote Attestation can be used bidirectionally as well - it allows the server to attest to the client that the machine is in a trustworthy state. This is perhaps an even more valuable use case: you might have fairly tight physical control of your personal machine, but a bare metal server in a data center is potentially open to attacks by the cloud operator as well as the previous tenants. Having attestations as to the firmware and the OS configuration can make it more trustable.

Why is generating a quote so slow?

There is lots of traffic between the tpm2-attest program and the TPM during the attestation process, and the TPM is not a fast device. Read the Endorsement Key (EK) and EK Certificate take a few hundred miliseconds, signing the quote takes another few hundred, etc. The process used to take around 20 seconds, since the TPM had to generate a new RSA Attestation Key (AK) to sign the PCR quote, and generating an RSA key requires finding large primes with certain values. The AK was replaced with ECC, which is much faster to generate.

Creating a new one each time should not be necessary; several attestation protocols use a pregenerated AK that is persistent in the TPM, except that opens up a race condition between generating a quote and receiving the sealed data. The quote includes the reboot count, but the sealed data does not reference it, so the TPM will unseal it if the AK is still valid, even if an attacker has rebooted into an untrustworthy state inbetween generating the quote and receiving the sealed response. By creating an ephemeral AK (with the stclear bit set in the attributes), the TPM will not allow it to be persisted and will refuse to reload it when the reboot counter increments.

The Discrete TPM is potentially a hardware weakpoint; a physically proximate adversary could remove the TPM from a machine and connect it to an untrusted device and then masquarade as the device to which the TPM had been connected. This would also potentially allow them to extract any sealed disk encryption keys, as described on the threat model page, and is one of the advantages of an fTPM inside the Management Engine.

A proximate attacker could also interfere with the LPC or i2c bus of a Discrete TPM using something like the TPM Genie, which allow them to both modify the hashes sent to the TPM during PCR extension operations, and read the unsealed secrets when they are returned if the TPM didn't support secret sessions.

However, the fTPM is a pure-software application inside the ME and potentially allows an attacker with code execution on the ME to find the sealing secrets that are used to protect the TPM keys in the ME NVRAM, which would allow attacks against the quoting and attestation process.